Talking Points:
The US Dollar dropped sharply today after Federal Reserve Chair Janet Yellen gave her thoughts on the economy with a more dovish bias than was perhaps perceived over previous months. Her outlook on the economy and monetary policy’s role within it was viewed as more cautious than other Fed members who have spoken in recent weeks. There was a familiar affirmation of the Fed’s commitment towards data dependent policy, however Yellen gave greater weight to the factors that fall further outside the direct indicators reflecting the dual mandate as they contribute to those trends over time. The central banker suggested the Fed’s consideration of recent global growth slowdowns have weighed more heavily on the outlook for the upcoming rate hike path with notable mentions of both China and oil.
Global growth concerns were referenced multiple times in Yellen’s statements, as she stated that “Global developments pose an ongoing risk to the economy”. The increased uncertainty surrounding “market confusion earlier this year over China's exchange rate policy” and January’s equities draw down seemed to give the group pause. Furthermore, low commodity prices, particularly oil, was seen to be weighing on inflation with PCE falling well short of the 2 percent year over year pace the central bank targets. Yellen would mention that core price pressures are more robust, yet not definitive in their trend towards target.
Another domestic issue that has contributed to the Fed’s uncertainty is wage growth. These concerns are placed against a low unemployment rate, rising consumer spending and confidence surveys showing still supporting optimism for the economy.
In a familiar effort at balance, Yellen affirmed the Fed’s ability to return to accommodation if necessary. These comments along with the elements necessitating them were something of a contrast to those of other Fed members, who in recent weeks had often supported the notion of looking past market turmoil and perhaps raising rates gradually.
However, there was also a greater emphasis on a practical asymmetry in the ability to apply policy noted by the Chair. She said that there is limited room to pursue further traditional lines of easing, though she remarked that there were plenty of options at their disposal. Recently, however, market commentary has turned more critical of the effectiveness of unorthodox policies that continue to extend from groups like the ECB and BoJ.
As the commentary was processed by the Euro strengthened nearly 0.75% against the USD, while the British pound advanced nearly one percent. USD/JPY fell half a percent and erased nearly 3 days of gains. 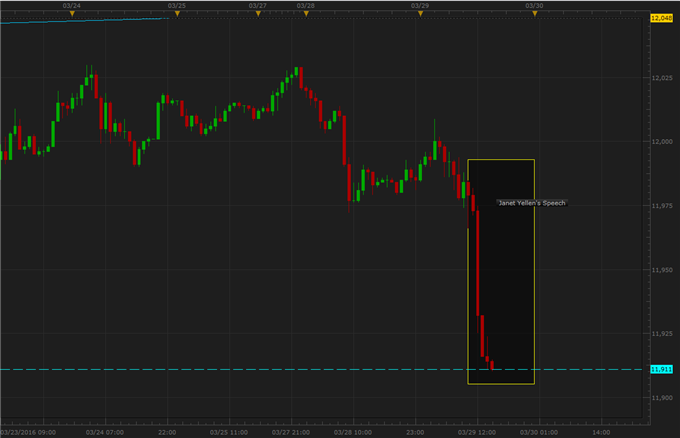