Imagine a small losing streak of just 5 trades risking 3% on each; it would cost you a massive 13% of your account. Think about that for a second, 13% of your account wiped out by just a handful of bad trades…… if you’re a trader the very thought of that should send shivers down your spine.
So, if you have a bad run you could easily end up decimating your account, after just a few trades. 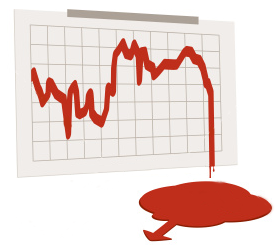 Let’s also remember math is pretty logical but we as human beings are pretty emotional. With math we can say that each trade had a risk of 3%. In real life though, most newbie’s after a few losses would make the mistake of trading out of anger. 3% risk becomes 5% and before they know it what started off as a little losing streak becomes a margin call.

There Is a Way Round Losing Streaks

It is just so simple, if you lose 3 trades in a row close down your platform and take a few days off trading. This allows you to:

How This Rule Has Helped Me

When I was a newbie I blew two accounts due to losing streaks. On my third (and final, if I blew it) account I started using this rule and my account just kept on growing. There have been several times over the past few years where I lost three trades in a row and took a few days off. Any one of those times, if I had kept pushing it I could have thrown it all away.
If it wasn’t due to stringently following this rule I would not be a trader today. I would have squandered away my capital and right now I would be a 9am to 5pm pen salesman.
This is something you should seriously consider adopting into your trading.